Why are some babies cooled (therapeutic hypothermia) after birth? - Newborn Cooling

Head cooling or whole-body cooling of a baby is a treatment used when a baby’s brain has been injured from a lack of oxygen (hypoxia) or lack of blood flow (ischemia) to the brain during labor and/or delivery. These babies have a diagnosis of hypoxic ischemic encephalopathy (HIE).

Cooling slows down the metabolic processes in the body of the baby in an effort to decrease the severity of brain injury from HIE.

It is important to note that cooling has been approved and recommended by the American Academy of Pediatrics Committee on Fetus and Newborn and the National Institute of Child Health and Human Development as treatment for babies who have suffered injury from a lack of oxygen or blood flow to the brain in an attempt to lessen the outcomes of death or major neurodevelopmental disability in these babies.

Specific criteria have been established identifying those newborns who may benefit from cooling. These criteria include: 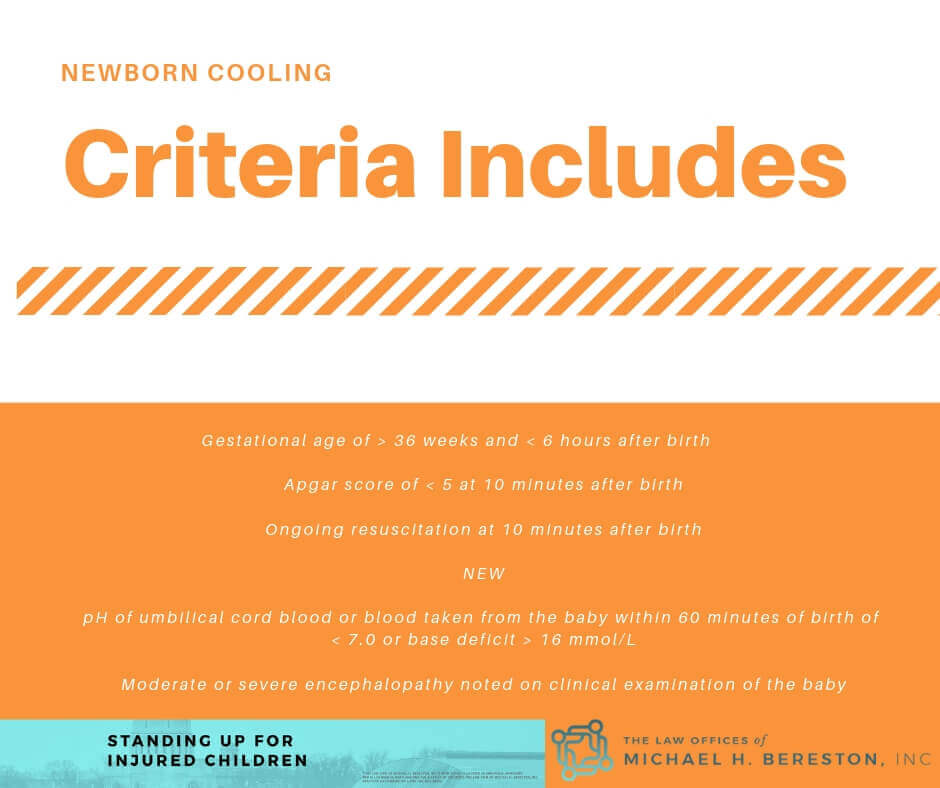 The baby is placed on a water filled cooling blanket when whole body cooling is done. Babies are cooled to a temperature between 33.5 degrees –34.5 degrees Celsius (92.3--94.1 F) for 72 hours and then are slowly warmed over 6-12 hours. During this time, the baby is given fluids through an IV or umbilical catheter. Some babies receive medication for seizure control during this time as well.

Because of the critical condition of these babies, frequently the baby will be intubated and on a ventilator during cooling.

Once rewarmed, babies with HIE will have an MRI of their brain and possibly an EEG to see if the baby is having seizures that may not be apparent. These studies may be reported as normal yet, cognitive ability may be impaired. Injury to the brain may not become apparent for several months or even longer.

Injury to the brain from Lack of oxygen (hypoxia) and/or lack of blood flow (ischemia), also known as HIE, may be caused by medical negligence.

If your baby has a diagnosis of cerebral palsy, HIE or has had cooling done, please contact the Law Offices of Michael Bereston for a case evaluation.